What Is It About Halloween and Weed? 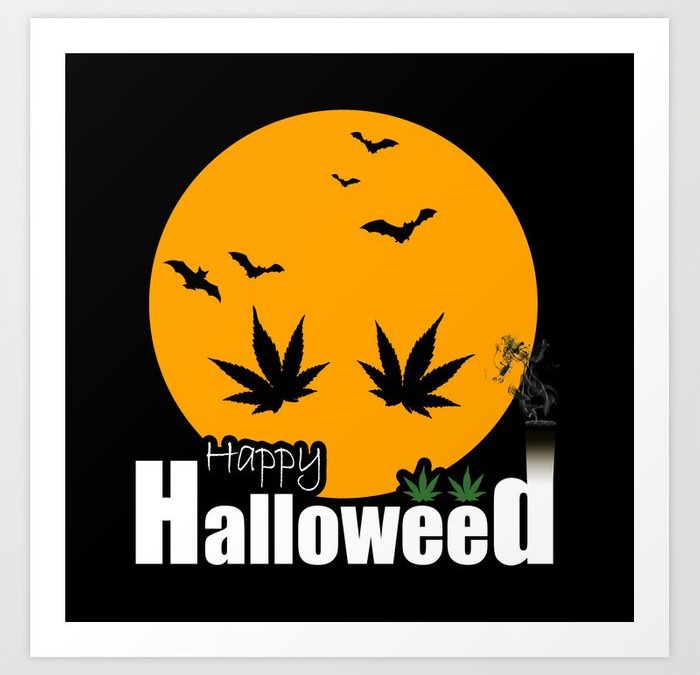 Splifftober. Croptober. Hemptober. Ghost Train Haze. Wicked Stepsister. White Nightmare. Ghostship. Durban Poison. Witches’ Weed. Marijuana and Halloween have gone hand in hand for many a full moon. Halloween is my favorite holiday to celebrate, and no Halloween party is complete without pumpkin bongs and human smoke machines puffing away. I’ve even been known to whip up some blood orange gummies on occasion if I’m feeling really festive. But what is the real connection between stoners and spooky-time?

Halloween is a time of imagination, and if there’s one thing stoners are good at it’s daydreaming. It doesn’t hurt that there are a ton of artsy potheads out there to help keep this trope alive. And who’s better at dreaming up weird costumes than people who spend their free time in their own headspace? Plus what stoner can’t get into handing out a bunch of free, sweet munchies to the neighbor kids and then eating the leftover candy themselves?? There aren’t too many of us who would turn up our noses at a Reese’s cup or Skittles. Or am I just talking about myself here? Nah, I’ve seen enough coworkers crush bags of candy that our vendors drop off this time of year to know I’m not alone.

Or is it simply that many of us stoners are a bunch of grown ups who’ve tried to keep that childhood spark of wonder alive in ourselves? Or are we just a bunch of kids who never grew up? That seems like too broad a generalization but it definitely holds true for some of us, myself included. I’ll still build a couch fort at the drop of a hat and turn it into a hot box.

Maybe it’s the fact that everybody is kinda clandestine and incognito on Halloween in their costumes, and at least for a certain age range of us, so was smoking pot prior to legalization. I’m not saying we had to put disguises on to get stoned, but a lot of us had to sneak around our parents’, RA’s, significant others’ and/or the Law’s back. There was an element of excitement in pulling out your paraphernalia from its hiding place, stealthing out the back door or side window, lighting up in the dark of night or in some hidden nook, and then having to stash everything again and mask the scent so no one notices. The parallels between Trick or Treating and sneaky smoking aren’t hard to see. You go out unknown into the night, score some dank treats, enjoy your ill-gotten gains, come back home and put your normal face back on. If I’m perfectly honest, I kind of miss the thrill of covert cannabis consumption; it made the whole process verboten and therefore a bit more exciting. But then I remember all the paranoia and guilt, and I’m glad we live in a legal state.

Okay, so the similarities aren’t an exact one-to-one match, but Halloween does stir up many of the same feelings in me each year. You’re never too old to sublimate your personality in favor of something funny or scary or sexy that you don’t get to let out most of the year. So this Halloween if you need a little help letting your inner child loose, come snag some adult treats at Elements Boulder!