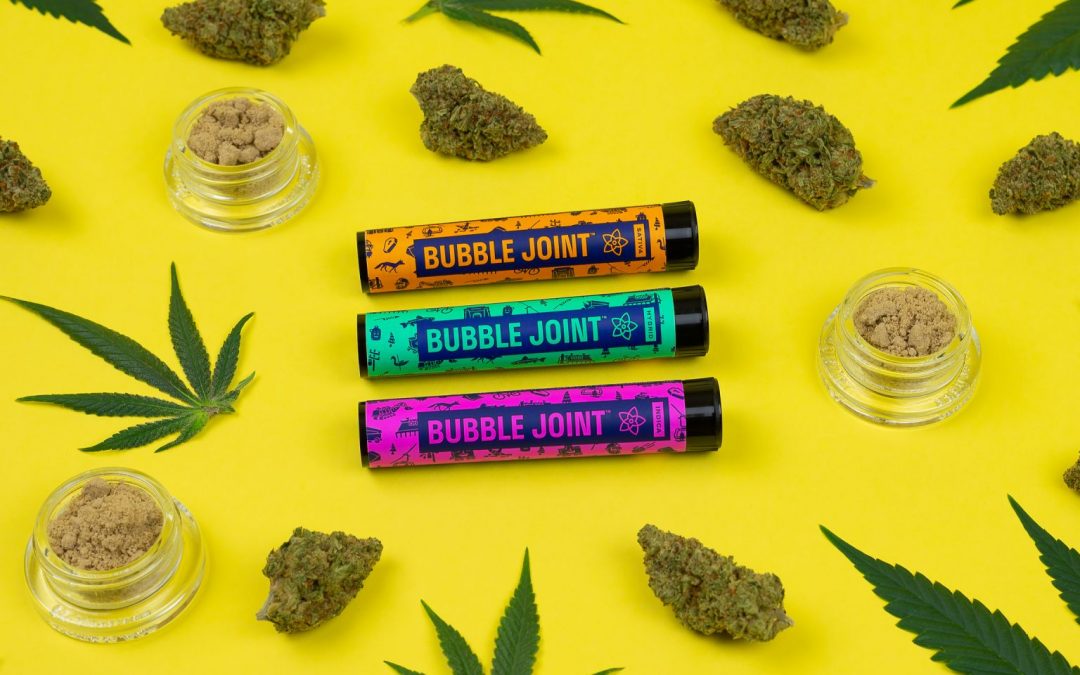 Elements Boulder is proud to offer a solventless concentrate once again from one of our favorite and longest-standing vendors, The Flower Collective. We’ve carried their Bubble Joints for years, which are a 5:1 ratio of bud to bubble hash in a .7g pre-rolled joint. The bubble hash is produced from and strain specific to the bud used in the joints, which makes them extra potent while retaining the delicious flavor of the original flower. Now we are offering their super-refined bubble hash in one-gram increments of strain specific, solventless hash!

How about a little bit of background on The Flower Collective first? They’re based up in Nederland, and they ain’t just a’woofin when they say “Ned Has the Best Trees.” According to the webpage on their company’s history, “[The Flower Collective are] growers and tokers dedicated to crafting naturally potent cannabis products through traditional growing, harvesting and extraction techniques. No solvents, no additives, no hurry-up, no corner cutting. Business is good, and it’s good for a reason: We do it right.”  And TFC does their flower right. The Super Blue Thai, Banana Punch, and Deadhead OG they grow are hands down the best cuttings of those strains I’ve had. Their bubble joints are one of my go-to items, whether I want a doob to really knock me on my ass at the end of a long day or if I want to impress an out-of-town friend with something the likes of which they’ve never had. I guarantee if you looked up my purchase history, I have bought a TFC joint minimum once a week for the past year or so because they are so fantastic. From a personal standpoint, I can’t hype The Flower Collective’s products enough. High quality flower, high quality hash, high quality high.

And the magic ingredient that makes their goodies so potent and tasty? TFC’s ice water Bubble Hash! To begin with, what is bubble hash? I have a previous blog post about various forms of concentrate if you’re looking for a more detailed description of the production of concentrates, but here’s a quick recap for you. Bubble hash is a solventless concentrate, which is to say that it is a concentrated form of cannabis but the concentrate is derived without the use of solvents like propane, butane, or super critical CO2. And since there are no solvents used in extraction, there are no residual solvents that have to be purged at the end of the process, making this a cleaner and arguably healthier form of cannabis concentrate than say wax or shatter. Besides the cannabis itself, the only other ingredient used in the production of their bubble hash is ice water. In order to produce bubble hash, flower is placed into and then tumbled through ice water in a series of mesh bags known as ‘bubble bags,’ each with progressively smaller mesh (measured in microns). This tumbling and dousing process removes more and more of the extraneous plant matter and leaves you with pretty much pure trichomes, which is where the majority of terpenes and cannabinoids such as THC are found in cannabis. Once dried and reconstituted, the result is a super-fine, light colored concentrate of a kief-like consistency, which tastes exactly like the flowers it’s derived from except is also nearly double, sometimes even triple, the potency of the starting product. And since bubble hash is a full-spectrum extract, it retains the medical benefits of the terpenes and non-THC cannabinoids which are often stripped out by solvents in other forms of concentrate.

What’s also really cool about TFC is their commitment to reduce their environmental footprint. The pure Nederland water they use in production “comes from snow melt in the Indian Peaks Wilderness, and it’s all we use to water our flowers. Our water circulation system allows us to re-use much of the captured snow melt, minimizing our impact on the watershed and saving some for the trout.” What’s not to love about a great product that is made in an environmentally-conscious manner? And the price point per gram is about half as expensive as the next type of solventless concentrates, like rosin. Plus, I feel like the bubble hash is more versatile. You can smoke it alone, roll it into a joint, use it as a bowl topper, or you could even press it into your own rosin with something as simple as a hair straightener and a piece of wax paper. The best news in my opinion though is that we’ll be selling the grams for 25% off every Sunday as part of our concentrate deals, making them quite affordable. And I don’t know about you folks, but a full gram of hash goes a looooong way. I still have some of my sample gram hanging out at home because I simply can’t smoke the stuff fast enough. I could top a bowl with bubble hash every day for a month without running out of hash. And if you’re a multi-talented individual who can roll your own joints, you can craft your own bubble joints for a considerable savings (.7g bubble joint at a 5:1 ratio of bud to hash means there are .56g bud to .14g bubble hash, and a gram of the straight bubble hash gives you nearly ten times the amount of hash for the cost of three of the pre-rolled bubble joints). It’s a great value for the DIYers and hand rollers out there. Compared to most solventless concentrates which can cost anywhere up to $70 a gram, TFC’s Bubble Hash is extremely affordable and still contains all the goodness of full spectrum cannabis concentrates without any of the stuff you don’t want. Come chat us up at Elements and take a peek at our new Bubble Hash. I guarantee you won’t be disappointed in The Flower Collective’s magnificent Bubble Hash!