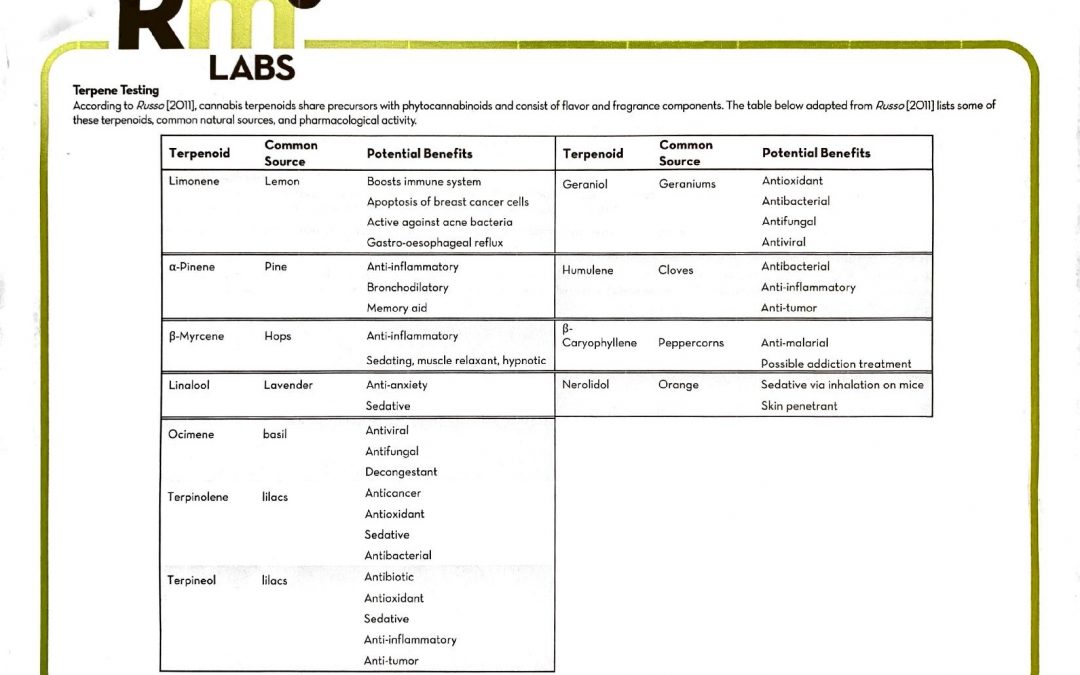 I’d like to pose a question that raises some controversy in the cannabis community. Does THC content really mean that much when compared to other factors like terpenes and overall cannabinoid profile? Personally, I don’t believe THC content is the be-all end-all when it comes to determining how high a strain gets you, and the science is starting to bear this out as testing of cannabinoids and terpenes becomes more advanced. Don’t get me wrong, it’s easy to go straight for the strain with the largest percentage on the jar, and generally you do get a good high from bud testing in the upper 20s and lower 30s, but you’re paying a premium just for those test numbers. But who’s to say that some other, lower testing strain that has a wider cannabinoid profile and a high percentage of terpenes can’t get you just as high? I’ve smoked some 31% THC Blue Dream that had such a clear head high that I really didn’t feel high at all (if that makes any sense–I immediately had to spark another bowl and even then was disappointed). And then I’ve turned around and smoked some 18% THC Bubba Kush that melted my face off and left me stoned on the couch for ages. So what could have made that Bubba Kush punch so far above its weight? Terpenes.

While I’ve blogged before about terpenes, it can’t hurt to have a short recap. Terpenes (aka terps) are organic hydrocarbons that all plants produce and which are responsible for taste and scent and which deters pests and predators while attracting pollinators. Put simply, terps are plant flavoring. But in cannabis these terpenes can have added medicinal effects and can also drastically affect the high you experience. The cannabis and scientific communities have started to recognize the importance of these little hydrocarbons. According to High Times, “The interest in cannabis terpenes is due to more than just the smell. Research has suggested that when a terpene interacts with cannabinoid receptors they can assist or hinder the effects of cannabinoids. Since then, products high in terpenes have increased in popularity. More breeders, growers and extractors are working to enhance the flavor profiles of cannabis by maximizing and preserving terpene levels.” Terpenes and cannabinoids combine to have a synergistic effect known as the entourage effect which can heighten your high. And while terpenes are responsible for medical benefits, contribute to the entourage effect, and give strains their unique scent and taste, terpenes only show up in tiny proportions, especially when compared to THC percentages. This makes them harder to test for, so it’s taken a while for testing labs to get on board, but nowadays the better labs are providing terp test results that can really help users focus in on the specific effects they hope to get out of certain types of cannabis.

In recognition of this trend, more and more labs are providing terpene testing results along with THC and contaminant testing. RM3 Labs here in Boulder is one of the largest testing labs in the state, and everytime we receive bud from In The Flow growers RM3’s testing results for the bud comes along with the shipping manifest. These results are yielded using Headspace Gas-Chromatography with Flame Ionization Detection. Let’s take a peek at some of their testing reports. Here are the testing results for some of In The Flow’s land race sativa strain, Durban Poison. 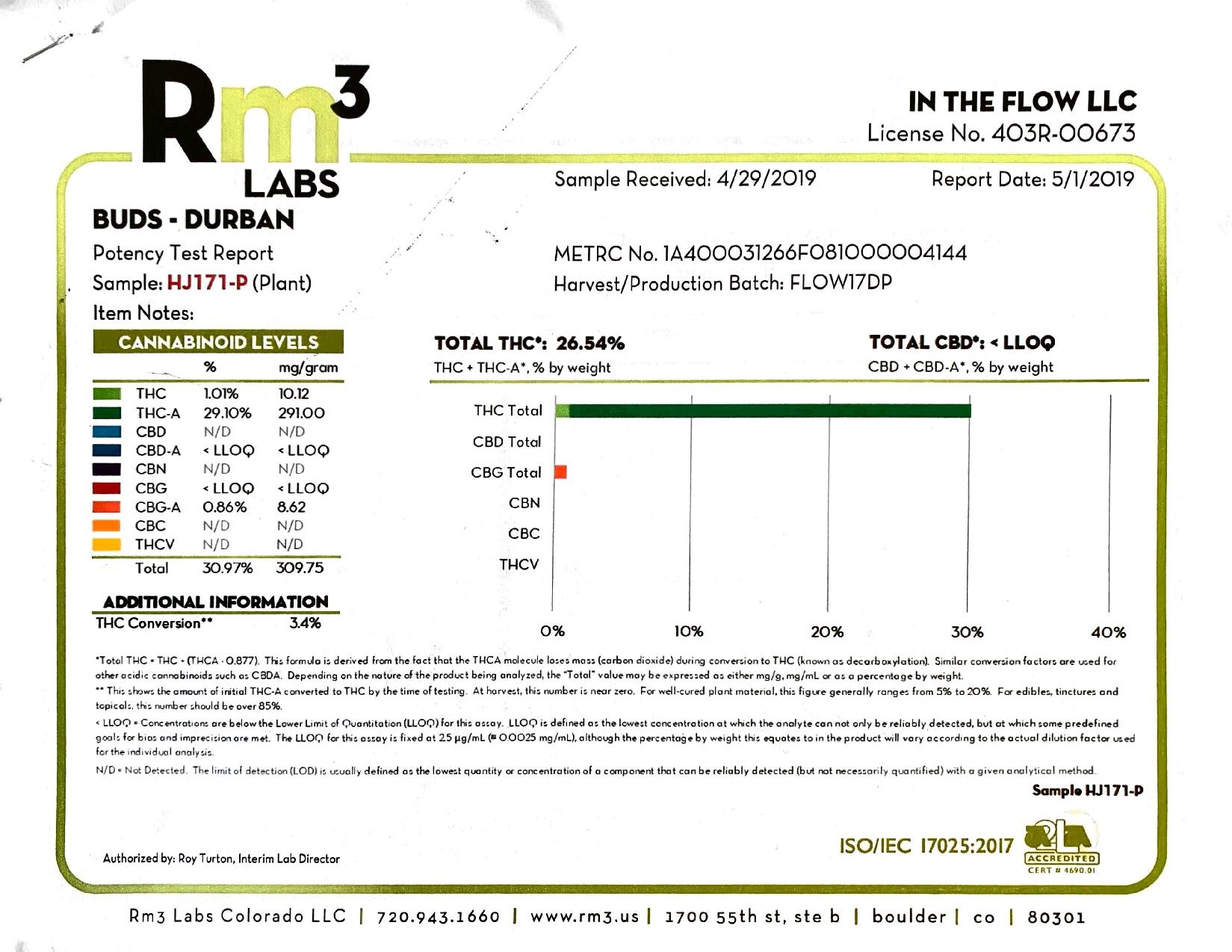 The front page is typically the cannabinoid makeup of the strain. On the left side are listed the cannabinoid levels of the 9 most common cannabinoids, their total percentage by weight, and milligrams of each cannabinoid per gram of flower. So for example, RM3 Labs lists not just the THC and CBD content but a total of 9 cannabinoids: THC, THC-A, CBD, CBD-A, CBN, CBG, CBG-A, CBC, and THCV. You can see in the Durban Poison testing that it only contains 1.01% THC but also has 29.10% THC-A, for which they provide a conversion factor to determine how much THC content there will be after decarbing. It also contains .86% CBG-A. Any of the cannabinoids with the -A suffix are simply the inactive versions of that same cannabinoid prior to decarboxylation/combustion/vaporization. Thus the majority of the psychoactive compound is inactive. This is why you really won’t get very high from eating the same nug that would get you blitzed in joint form. Now let’s compare page one of the testing report for the indica strain Danky Kong from In The Flow. 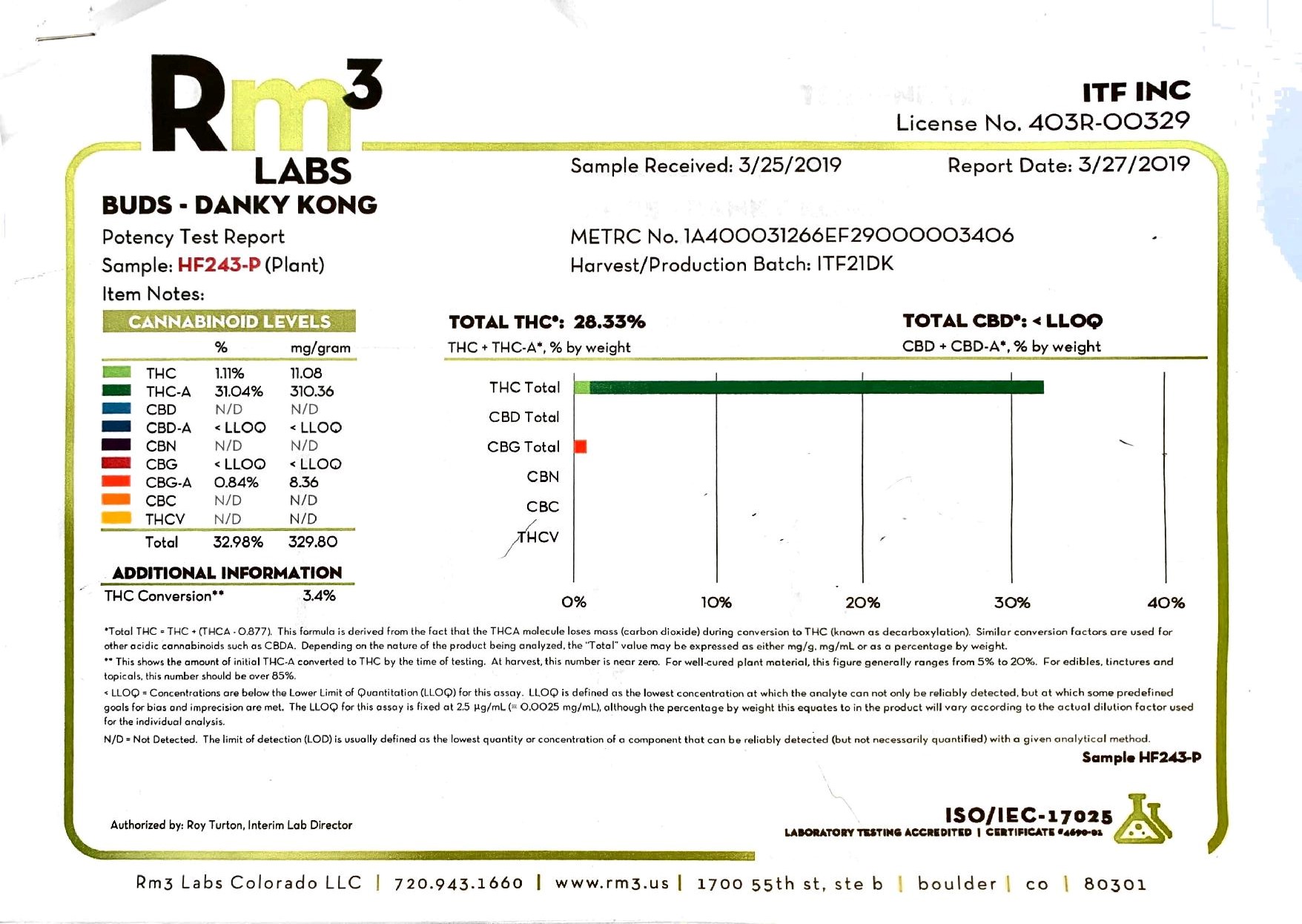 Danky Kong has a fairly similar cannabinoid makeup: 1.11% THC, 31.04% THC-A, and .84% CBG-A. Danky Kong beats out Durban poison ever so slightly in terms of THC/THC-A content and a comparable amount of CBG. This might lead you to believe that these strains are fairly similar in effect if you’d never tried them before, but you would be dead wrong. Durban Poison is a really racey, energetic, and uplifting strain vs. Danky Kong which is a super stony, heavy body high, relaxing strain, which means they have almost polar opposite applications. From a personal preference standpoint, I’m an indica smoker mainly and Danky Kong is my favorite strain we carry and Durban Poison is extreme sensory overload for me that can lead to paranoia. They couldn’t be more different in my mind and yet they share notably similar cannabinoid levels, including THC content. So what is it that makes these strains so very different from one another?

Terpenes make all the difference.

Most regular users in recreationally legal states know the basic cannabinoids nowadays, so most of this first page is none too surprising. Page two is where the intricate biz starts. This is the terpene testing report for Durban Poison. 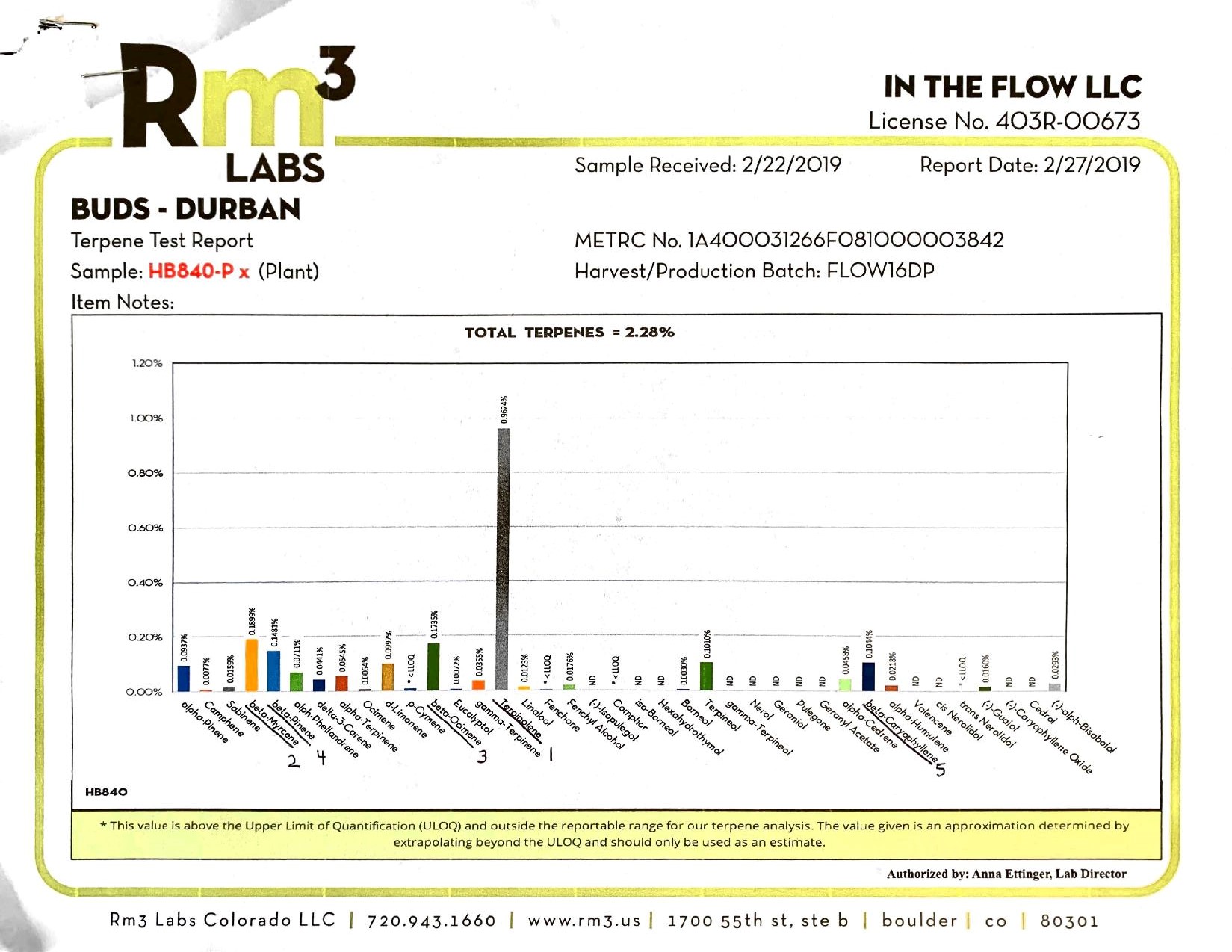 . RM3 Labs tests for a wide range of terpenes, many without statistically significant amounts present, so I’ve gone ahead and underlined and numbered the five terpenes that appear in the highest concentrations. You can see that, in descending order of concentration, Terpinolene, beta-Myrcene, beta-Ocimene, beta-Pinene, and beta-Caryophyllene are the most common terpenes found in Durban Poison. Pinene, Caryophyllene, and Terpinolene are responsible for the piney, woody aroma whereas the funky sweetness comes from a combo of Myrcene’s fruity sweetness and Ocimene’s citrus skunk scent. I have a coworker who insists Durban Poison smells like sweet pickles, and while I’m not sure I quite agree I can see where she’s coming from with the sharp-sweet scent apparent in both. The terpenes most responsible for Durban’s sativa effects are almost certainly Ocimene and Pinene, both of which tend to create a laser-focused head high. The combined effects of CBG, Myrcene, and Terpinolene temper some of this head high to make it a bit more relaxed. Altogether, this batch of Durban Poison has 2.28% total terpenes by weight, which is an exceptionally high percentage of terpenes for most strains. It’s not uncommon for strains to have less than 1% total terpene content. I chose these two strains from In the Flow because their growers intentionally cultivate their plants for high terpene content, which in my opinion is what makes them such fine growers. 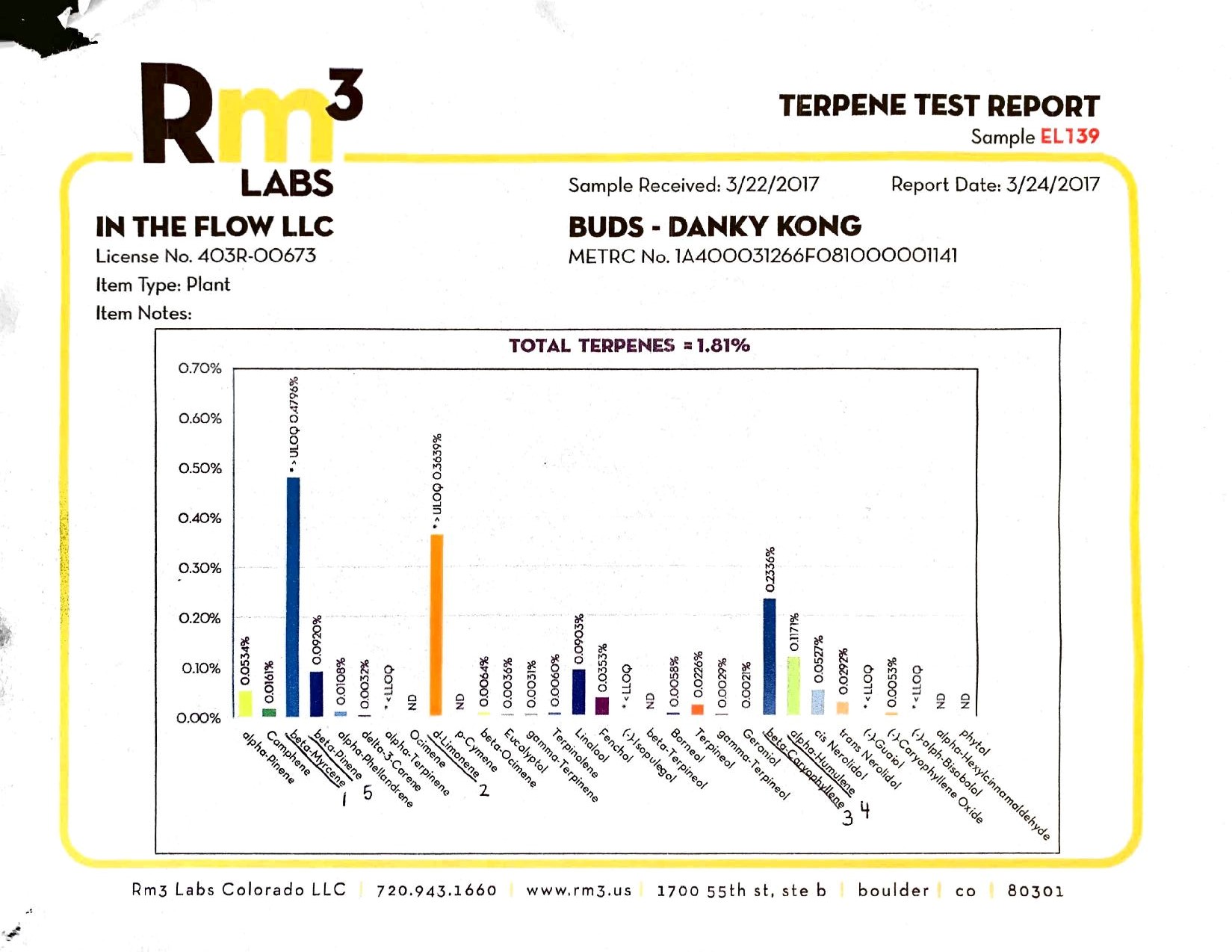 The five most prevalent terpenes in Danky Kong in descending order are: beta-Myrcene, d-Limonene, beta-Caryophyllene, alpha-Humulene, and beta-Pinene. Myrcene is the single most common terpene across all strains of cannabis, and it has a fruity tropical scent often associated with mangos, which have a natural prevalence of Myrcene themselves. Myrcene also tends to be sedative and relaxing in effect, as are Humulene and Caryophyllene, which is where Danky Kong gets its relaxing indica body high. Caryophyllene lends a mild peppery scent to the buds and Humulene gives them a light spicy, hoppy taste. The second most prevalent terp in Danky Kong is Limonene, which combined with the previously mentioned terpenes yields Danky’s characteristic spicy grapefruit taste. Typically Limonene and Pinene are predominantly found in sativa strains, which is why Danky Kong is so coveted: it’s one of those rare citrusy indica strains. That said, Danky Kong is a hybrid indica, and this hybridity from Limonene and Pinene balances out some of the heavy body high with a little bit of headiness. In terms of total terpenes, Danky Kong weighs in at 1.81% terpenes, which again is a relatively high percentage in terms of total terpenes. So when we compare Danky Kong with Durban Poison, Danky has 28.33% THC and 1.81% terpenes, whereas Durban has 26.54% THC and 2.28% terpenes. So which one is more potent overall??

This is where it gets tough, because we’re dealing with apples and oranges. There are over two hundred types of terps, and some terpenes can have polar opposite effects from others. We could fall back into the same trap of comparing overall percentages, but that may not necessarily be helpful as we found with constantly shopping for the highest percentage THC. Really the best way to adapt this information is to home in on percentages of specific terpenes. So say you’re looking for a nice focused sort of high–something good for work or homework–the kind that pinene typically yields. So which of these two strains would be better? Danky Kong has .092% beta-Pinene, but Durban has .1481% beta-Pinene. Granted, these are tiny percentages, but when you take into account the entirety of Danky and Durban’s terpene profile (which is made up of dozens of cannabinoids) are respectively contained within 2.28% and 1.81% of the bud’s weight by volume, these are statistically significant amounts that can have a major impact on the type of high and the medical effects experienced. So if you’re targeting for a Pinene-heavy strain, Durban is the obvious choice for the focused high. Conversely, if you’re looking for the relaxing pain relief from Myrcene, it only makes sense to choose Danky Kong because it contains nearly four times as much Myrcene as Durban Poison.

And on a bit of a tangent, I would sooner take a lower testing THC strain with higher terpene levels than a high testing THC strain with a limited terpene profile. This is exactly what I was talking about with the Bubba Kush I mentioned at the start. That’s why I always tell customers who are torn between two strains to give it the ol’ Toucan Sam test, take a whiff of both, and follow your nose. What you’re detecting by smell is the different terpenes in each strain. Humans have wonderfully associative memories and our sense of smell is the strongest mnemonic trigger, so I’m convinced that after smoking a decent spread of strains, your body begins to associate certain smells with certain highs. So in a way, whether you know it or not, your body has likely started to recognize the scent of terpenes you prefer. I say, trust those instincts. Or if there’s a specific terpene whose effects you are looking for but you’re not sure which strains to find it in, ask your budtender! We may not always have immediate access to the terpene testing results, but our budtenders can point you towards strains heavy in the desired terpene.