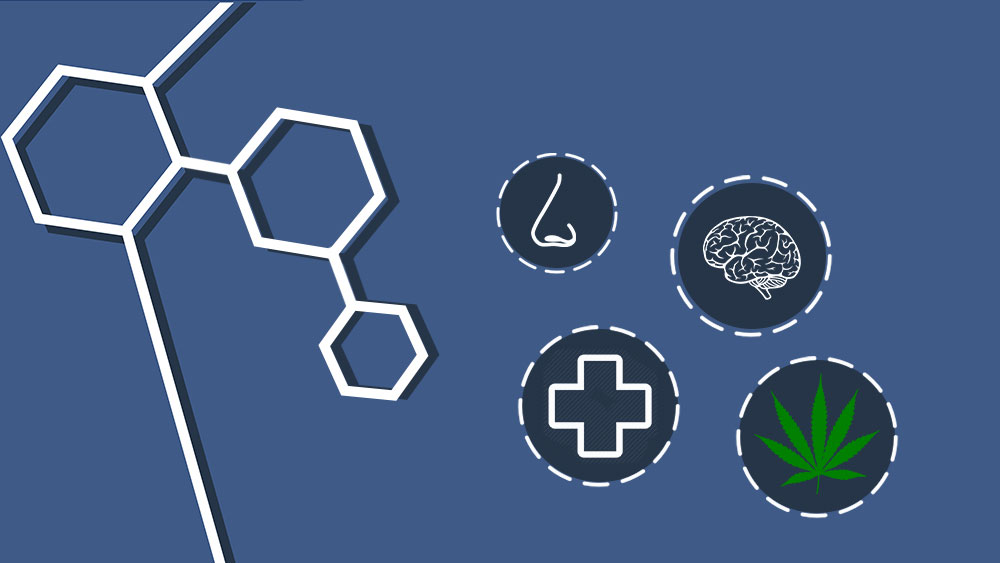 At some point in your cannabis escapades, you’ve probably come across the term Terpene before from a budtender or your buddy who’s a dab snob, but what exactly are terpenes?

Terpenes exist in a context that goes well beyond marijuana. Not to wax scientific (dab/dad pun intended), but terpenes are organic hydrocarbons produced by plants and certain types of insects, and they typically give off a strong scent. Virtually every plant species on the globe contains terpenes, including your tasty smokeable greens. Scientists theorize that terpenes’ potent odors “may protect the plants that produce them by deterring herbivores and attracting predators and parasites of herbivores,” as well as granting the plant resistance to certain pathogens (Wikipedia, “Terpene”). Take the mighty pine tree for example pines produce the terpene known as, that’s right, pinene. This is why Christmas trees and coniferous forests smell so wonderfully fresh and, well, piney. Terps such as pinene can be extracted from pine resin or sap commercially, which is where many cleaning products get their distinctive clean scent. Pines produce ?-pinene to repel weevils and bark beetles as well as to fight fungal infections that can cause bark rot (interested in horticulture and/or entomology? Check out this USDA  article on the effects of pinene on insects and tree health). Cannabis naturally produces terpenes for similar reasons: to protect itself from harmful insects and attract beneficial predators and pollinators like us, homo sapiens.

While there are nearly 200 known cannabis terpenes, this first post on terpenes will focus on five major terps that appear in cannabis strains: Caryophyllene, Limonene, Linalool, Myrcene, and Pinene. These compounds give cannabis strains their individual scents and tastes. Here’s a great visual representation and breakdown of terpenes provided courtesy of Leafly! Each terpene can provide different physiological benefits depending on how it interacts with the body’s endocannabinoid system. Strains of weed often contain multiple terpenes in varying ratios, giving each strain a unique terpene profile. Cannabis plants produce terpenes in the same glands as they produce THC and CBD–the trichomes, aka the crystals that coat the most coveted nugs. And while most cannabis research initially focused on THC, CBD, and the other cannabinoids, scientists are beginning to shine some light on how the terpenes interact with these other compounds to alter the high and yield health benefits. These benefits can vary widely between the different terpenes, so we’ll do a quick overview of each.

Caryophyllene is the terpene responsible for the peppery, woody, spicy smells in some of this humble budtender’s favorite strains. It also naturally occurs in black pepper, cloves, hops,  basil, and oregano. (Fun Fact: did you know that hops and cannabis are related species of plants?) Caryophyllene is an analgesic and anti-inflammatory and may help fight cancer, anxiety, and depression. For an excellent example of its analgesic properties, cloves (which are heavy in caryophyllene) have been used as a natural toothache remedy for centuries. That’s why when you bite into a whole clove your tongue goes numb-ish and why dentists pack dry sockets with a clove-infused pack. New studies suggest that this terpene may actually be anti-fungal in nature as well. Some well-known strains containing high percentages of caryophyllene commonly include indicas like Bubba Kush, OG Kush, and Chemdawg, and even some sativas like Sour Diesel.

Limonene is a terpene commonly found in–you guessed it–citrus fruit like lemons and gives off a sharp citrus scent. It is also the second most common terpene found in marijuana. It’s a natural insect repellent much like pinene. Limonene is highly valued medically for its anti-carcinogenic, anti-bacterial, and anti-fungal properties. It may also aid in the prevention of tumor growth. As far as psychoactive effects, limonene lends itself the sativa side of things, typically giving a good clear head high that some claim is good for mental focus and potentially has benefits in the treatment of disorders such as ADHD. Many of the fruitier, more citric Haze strains such as Tangerine, Super Lemon, Super Silver, and Cannaloupe Haze–almost all hazes are sativa or at least sativa leaning, although you can find limonene in some hybridized indicas like Mandarin Sunset and Grape God Bud, too.

Linalool is one of the more floral terpenes, often lending certain strains a lavender scent that can even sometimes be a bit spicy. Linalool can be responsible for some of cannabis’ sedative and calming effects. Unsurprisingly, lavender contains good quantities of linalool, which is why many essential oils companies recommend lavender in the treatment of stress. Additionally, linalool has cancer-fighting, pain-relieving, and anti-epileptic and anti-convulsant health benefits. Linalool is typically found more concentrated among indica strains, and its anti-anxiety and sedative effects make this terpene ideal as a sleep-aid. Many purple strains contain linalool. Some of the more common linalool-heavy strains are Grand Daddy Purple, White Rhino, Great White Buffalo, Lavender, G-13 and L.A. Confidential.

Myrcene is far and away the most common terpene found in cannabis. It’s known for its fruity, earthy scent and is often associated with the heavy stonyness or “couch lock” of indica strains. Myrcene is known to increase the efficacy of THC and the overall high. This is why medical patients are recommended to eat mango, a fruit with high myrcene content, ahead of dosing to increase the efficacy of the THC. Myrcene also has anti-carcinogenic, anti-spasmodic, anti-depressant, anti-inflammatory, antioxidant, and antiseptic properties as well. Strains known for especially high myrcene content include Pure Kush, Grape Ape, Mango Kush, OG Kush, and White Widow.

And last but not least for today is Pinene. As mentioned previously, pinene is responsible for the piney scent in many cannabis strains and can be found in coniferous plants, eucalyptus, rosemary, dill, basil, spruce, and sage. You don’t often associate smoking with increased airflow in the lungs, but in fact pinene is a bronchodilator known for improving the efficacy of lung function. Pinene can actually counteract some of the forgetfulness we stoners are prone to, and scientists have found pinene may counteract short-term memory loss from getting high. It can also inhibit cancerous cell growth. Pinene is typically contained in strains like Trainwreck, Jack Herer, Blue Dream, and Strawberry Cough and is found commonly across sativas, indicas, and hybrids.

So there’s a quick rundown of five of the more common terpenes found in cannabis ad some of their medical and psychoactive effects. Each cannabis strain presents a unique terpene profile that is a combination of many terpenes, making each and every strain have its own terpy goodness. This is by no means a comprehensive list, and it is one we will continue adding onto in future blog posts, so keep your eyes peeled for a new post about some of the lesser-known terpenes!