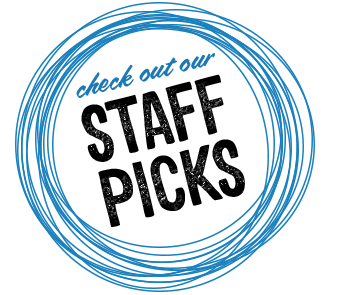 I can remember as a kid, the rinky-dink local video rental place had a shelf of Staff Picks within each film genre, and I always checked that shelf first because they chose some quality deep cuts I never would have found on my. Thanks to their movie buffs, I discovered classics like Critters, American History X, Shadow of the Vampire, Ninth Gate, eXistenZ, Blade Runner, The Silence of the Lambs, and the obscure Monty Python offshoot Jabberwocky, to name a few. And while maybe some of the flicks were a little intense for a 12 year old, I could always count on my older brother to rent whatever I picked out for me, and as a result many of the movies I found on the Staff Pick shelf were formative for me as an act of childhood rebellion. I never would have developed a passion for true crime and a love of creature features if it weren’t for their staff. Soon enough I just started asking whoever was working the counter what I should rent this go ‘round. I firmly believe that the same holds true with marijuana–it behooves us all to check in with the folks who do this for a living. You just might find a new favorite. After all, we spend a significant amount of our time trying out and learning about all the products we carry. So here are our staff’s top picks!

Generally we sell more indicas in the winter, I think because people are stuck indoors and looking for a release from the monotony, so they go for strains that lend themselves to night in front of Netflix wrapped in a warm blanket. It seems the citrusy and fruity tasting indicas are the most popular with the crew this season. Ashlei Van Gorder and Regina Smith chose Banana Citrus Kush, a mellow indica dominant hybrid with a goofy high. Its genetics include Banana Kush crossed with Citrus Kush, giving it that double kush whammy of relaxing body high and a smidge of a head buzz from the limonene that gives the strain its citrus twang. Similarly, Kat Marcotte, Lanessa Newman, and I picked Danky Kong for our favorite. Our Danky Kong is grown by In The Flow in Boulder, who are small batch growers with multiple Cannabis Cup winning strains. The spicy, grapefruit terpene profile is heavy in myrcene, limonene, and caryophyllene, giving it an intense body high that doesn’t leave you completely couch-locked, once again thanks to the limonene, which is typically more prevalent in sativa strains. Personally, I think Danky Kong is the tastiest strain I’ve had, hands down, and it almost always comes in from In The Flow testing in the 30% THC range. Danky is my go-to for impressing my out of state friends when they visit, and it hasn’t failed me yet. Gabby Ruiz voted for Grape Krypt, another fruity, stanky indica dominant hybrid strain with light purple undertones and–surprise, surprise–a grape taste. Its genetics are a cross of Grapefruit and Captain Krypt OG. In terms of effects, Grape Krypt is a little heavier on the indica scale and is great for relieving pain and insomnia. Truly the heaviest of the indica picks comes from Brittany Newman with Ice Cream Cake, a Wedding Cake and Gelato 88 cross. This sweet vanilla strain will put you in the couch for sure with its sedative body high and heavy-on-the-eyelids feel. I’m also a big fan of this one, too, especially for an end-of-the-night bowl. And lastly, on the lighter side of indica is Brie Ruiz’s pick, White Nightmare. White Nightmare is an interesting case: typically it is a sativa hybrid of Blue Dream and White Moonshine, but the phoneme that Sevenfive Farms cultivates is an indica dominant cutting. It’s a pretty mellow, earthy strain which is ideal for an after work smoke and relax session.

This category is a little more nebulous than the others, because arguably every modern strain has been hybridized in one way or another. What we’re looking for here are the true down-the-middle hybrids whose effects are the best of both worlds. Gabby, Brie, and Brittany selected one of newest strains that we’ve started carrying from Silverlake Holdings, and it’s one whose name is a bit of an oddity these days–rather than naming the new strain the growers simply went with its genetics: The White x Chem #4. It has a longer slender nug structure with a gassy, earthy scent that belies a laid-back high despite the usually racey Chem genetics which is mellowed by The White’s chill indica effects. Kat and I were the odd folks out, and we respectively went with Crescendo Sour Cookies–a stupefying Girls Scout Cookies and Crescendo derivative–and Bear Dance, a nice piney Uzbeki Hashplant and Snowcap cross with a solid body high and a cerebral focused high without any of the anxiety. Ashlei selected Gushers, a fruity purple strain that’s a potent blend of Gelato #41 and Triangle Kush, and which solidly places it on the indica-dominant side of hybrid. And then Lanessa and Regina followed suit and chose Jungle Cake, another of our new strains, for their favorite hybrid. Jungle Cake is a high-testing hybrid of White Fire #43 and Wedding Cake that has notes of sweet diesel and funky kush. I don’t say this about too many strains, but the Jungle Cake certainly had me feeling giggly.

Once again the citrus strains took the cake in the sativa category. I went with Lemon Skunk, specifically the Connoisseur Cup winning version In The Flow grows. Lemon Skunk is heavy in terpinolene, beta-pinene, and ocimene. Ocimene is the other, less common citrusy terpene, but along with the sharp lemon smell there comes a funky, almost cheesy smell that fills the room whenever you pop the jar open. And ocimene, unlike limonene sometimes, lends itself to a much more relaxed, chill sativa high rather than a racey and energizing one. Sisters Brie and Gabby unsurprisingly once again have similar tastes in bud and both went for Lemon Zkittlez, which is a cross of the Lemon Skunk I selected and the infamous Zkittlez strain. Lemon Zkittlez is a little sweeter smelling, and perhaps a touch less skunky but has an equally chill head high as its parent. And then we’ve got our ladies morning-out Mimosa group including Regina, Ashlei, and Lanessa, who chose yet another citrus strain, this time with a pleasant scent of oranges. Mimosa is a euphoric, orangey splash of head high perfect for a wake n bake, a stroll through the mountains with the dogs, or perhaps even a touch of brunch. It crosses Purple Punch and Clementine, and it typically tests in the mid twenty percent THC range. Lastly, Brittany chose Durban Poison, which is about as pure a sativa as you can get because its genetics are simply those of a landrace sativa native to South Africa, hence the name Durban after the South African city. A landrace is essentially a strain whose unadulterated genetics can be traced directly back to its native soil. Despite sounding like eugenicists, many folks seek out the pure genetics of landrace strains because if they’re truly landraces they haven’t ever been bred with anything else and therefore has all the cannabinoids and characteristics it evolved naturally to have rather than those selected by growers, who too often prize THC content over terpene and cannabinoid profile. Durban’s unique tang is reminiscent of sweet pickles with a bit of pine scent from its terpinolene content, and its energetic head high is tempered by the strain’s naturally high CBG content, which calms a bit of the raciness.

The majority of us selected Coda Signature as our favorite edibles company. Regina is a big fan of their Cream and Crumble white chocolate bar, whereas Ashlei and I are fond of their Fruit Notes. I buy a package of their Coconut and Lime Fruit Notes every week before my days off. Kat isn’t picky: she likes all of their edibles, but she also swears by their topical line of Bath and Massage Oils. Brittany picked the indica Altus Pear Gummies, saying they’re “Hands down [her] favorite edible!” These low sugar gummies are more like a Welch’s fruit snack than a sour gummy, and the fresh fruit puree used for the base of the gummy makes them delicious. Gabby selected the Green Rooster Wake N Bake coffee cookies because she loves the espresso taste and the pleasant high. Lanessa and Brie like the Koala Chocolates and their favorite flavors are Chocolate Turtle and the Mint Chocolate. And everybody besides Kat selected the Escape Artists Relief Cream, and the preferred scent is the Lavender. Brittany swears by it for aches and pains especially head and neck aches. Personally, I bought a jar of Lavender Relief Cream for everybody in my family for Christmas. This high-CBD topical is the only thing that kept me walking after I tore my PCL last year. My mom loves it for the arthritis in her hands. I’ve never heard anything but good things from customers and reviewers. Maybe give them a try for our new Topical Tuesday discounts every Tuesday here at Elements Boulder Dispensary!

We had an even split between Natty Rems and West Edison when it came to concentrates, except for Brie because she “Don’t dab, dude…I’m OG.” She’s still new here; we’ll bring her over to the dark side yet. Brittany, Regina, Kat, Gabby, and I went with Natty Rems for our favorite live resin company and in order our favorite strains are: Banana Kush, Grape Stomper, Do-si-dos, Grape Stomper, and Banana Kush. Their concentrates are not only delicious but retain the cannabinoid profile of the plant thanks to the extraction process using the plant while its live and freshly harvested, not cured, and then placed in a cryo chamber and blasted with minimal solvents as the freezing process helps release the trichomes from the plant matter. And thanks to that broader cannabinoid and terpene profile, Natty’s Live Resin has a high and taste similar to that of flower but with the potency of concentrate. Ashlei, Regina, and Lanessa voted for West Edison’s Doc Hollywood budder, Kong wax, and Crescendo shatter.

So if you’re ever at a loss for what to try or just want to branch out, ask your budtenders what they’ve been into lately. And as you can see, we frequently come to a consensus about certain items and strains. As an added benefit of getting eventually to try out everything in the store, we all tend to gravitate towards the best quality products. Even if it’s just to try out a gram of a new strain, snag a recommendation from one of the staff. We’re always happy to talk to people about our favorite goodies because we know and love them–we’re not just salespeople but consumers, too. And thanks as always for shopping local!