Of Hemp and Ancient Human 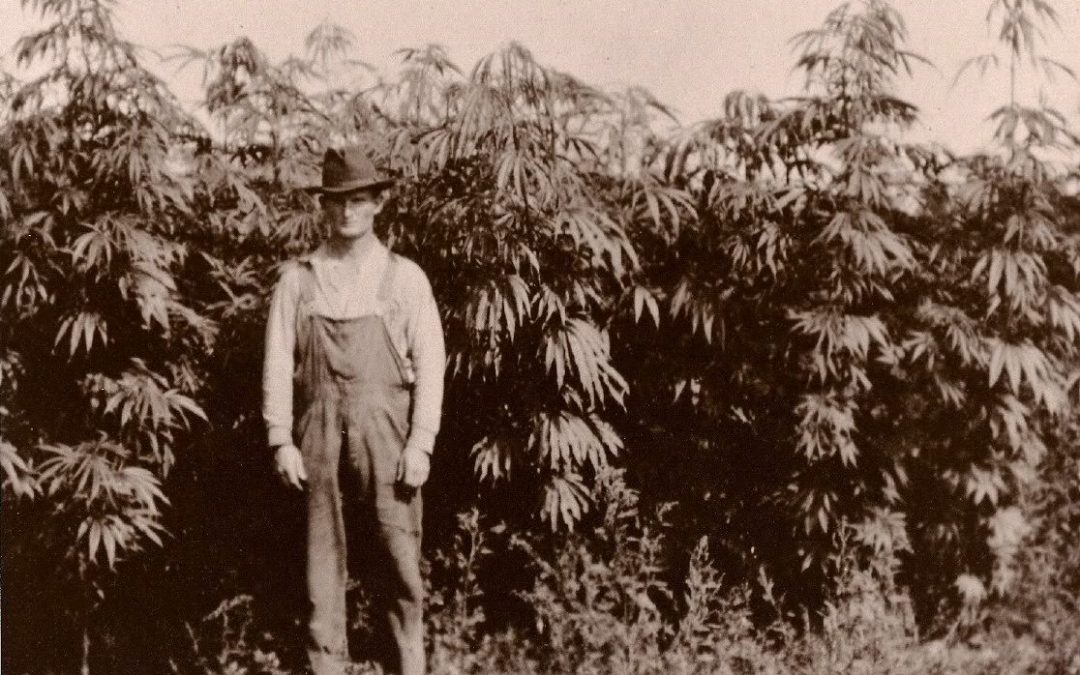 Of Hemp and Ancient Human

Humans and cannabis hemp have a long and intertwined history that goes back millennia, farther even than written historical records extend. But first it may behoove us to learn a little about hemp itself first. Hemp is a type of cannabis sativa with low THC and high CBD content, which reduces or eliminates the psycho-activity typically associated with recreational cannabis use. It is an extremely fibrous plant, which makes it valuable since the hemp fibers spun from the plant are particularly durable. According to Robert Deitch’s book Hemp: American History Revisited, hemp is one of the world’s fastest growing plants, which explains why we colloquially refer to marijuana as ‘weed.’ During its vegetative growth period, hemp can grow 7 to 10 centimeters (2.76 to 3.94 inches) per day. Hemp is typically ready for harvest within four months. Hemp is an annual crop grown from seed, generally in temperate zones, and it can exceed 16 feet in height. It can grow tightly packed together and can reach the proportion and density of a small forest. The species cannabis sativa first diverged from the genus Humulus, which includes hops, on the steppes of Mongolia and Central Asia around 27.8 million BCE.

Historians and archaeologists agree that hemp is one of the earliest plants to be cultivated agriculturally by human beings. Some of the earliest known use of hemp first appears on the Oki Islands off of Japan, where archaeologists found cannabis seeds from around the year 8000 BCE, suggesting its cultivation and use some 10,000 years ago. Considering the first complex, non-photographic languages were first recorded in Sumeria around 3500 BCE, four and a half millennia after signs of cultivation, humans and cannabis have a rather storied history together. There is also evidence of hemp use during the Neolithic Age in China where pieces of pottery that date back to the 5th millennium BCE have impressions of hempen cord and rope impressed into the clay itself. There’s also evidence that the Chinese went on to develop hemp clothes, ropes, shoes, and paper. We have also discovered the graves of shamans dated back to around 500 BCE in Mongolia and Siberia that contain burned hemp seeds, alongside the bones from sacrificial horses–the most profound of sacrifices to the gods for a nomadic horse-faring culture–which suggests that the spread of the plants was often in association with spiritual practices.

The first written record of cannabis comes to us from the ancient Greek historian Herodotus around 450 BCE. I was a Classics minor in college, so you’ll have to excuse me while I wax nerdy about one of my favorite authors of antiquity. He is one of the first known historical documentarians, even if some of his stories are, shall we say, embellished. I mean, gold-digging ants the size of dogs, dictators who whip the sea for insolence, nude sailors riding dolphins, and cyclopes with hoards of treasure?? While he does take some creative liberties, many of the historical events can be corroborated. We get the story of King Leonidas and the 300 Spartans who held off the advance of Xerxes’ entire Persian army at Thermopylae from Herodotus. But he also records early instances of ritual and recreational use of cannabis. In fact, the word cannabis hasn’t changed since his day: we derive its name from the ancient Greek ‘kannabis.’ Herodotus writes first of hemp and then of its use in Scythian funerary rituals (a Greek-adjacent culture of older Middle Eastern origins) and recreation. He writes, “In [Scythia] a sort of hemp grows, very like to flax; only longer and thicker; and much more excellent than ours, whether sowed or produced by Nature. The Thracians clothe themselves with garments made of the hemp.” And he continues in reference to Scythian funerary practices, “When [the deceased’s relatives] have cleansed and washed their heads, they set up three pieces of timber leaning to each other, and laying a good number of woolen bags close together, throw burning stones in to a hollow space left in the midst of the wood and bags…The Scythians put the seeds of this hemp under the bags, upon the burning stones; and immediately a more agreeable vapor is emitted than from the incense burnt in Greece. The company extremely transported with the scent, howl aloud.” Ancient Mediterranean mourning rituals often include the rending of hair and garments and the hiring of professional mourners to wail aloud to the heavens, which explains the practice of cleansing oneself with incense and shouting that is mentioned. This mad screaming would later be used by cretins to demonize cannabis as a substance that caused one to lose their mind, but truly what Herodotus is writing about is a transcendent ritual used to mourn loved ones and send them on their way to the afterlife. Furthermore, Herodotus explains that the Scythians would also use steam and smoke baths infused with hemp to clean themselves, saying, “this manner of purification serves instead of washing: for they never bathe their bodies in water.” Not to make light of other cultures, but I guess smelly stoners have been a thing for a good long while. Then again smoke cleanses are not a culturally isolated phenomenon. Anyhow, it is from Herodotus’ histories that we receive first and secondhand accounts of cannabis use in both recreational and spiritual practices by ancient peoples in a manner comparable to modern cannabis usage, because here we are almost 2500 years later smoking it to expand our minds and using topicals for recreational and medical relief.

However hemp cultivation didn’t reach Europe for some time. According to textile expert Elizabeth Wayland Barber, “textile use of Cannabis sativa does not surface for certain in the West until relatively late, namely the Iron Age…I strongly suspect, however, that what catapulted hemp to sudden fame and fortune as a cultigen and caused it to spread rapidly westwards in the first millennium B.C. was the spread of the habit of pot-smoking from somewhere in south-central Asia, where the drug-bearing variety of the plant originally occurred. The linguistic evidence strongly supports this theory, both as to time and direction of spread and as to cause.” So with the import of cannabis indica from Asia, also referred to as India Hemp at the time, the Europeans started getting groovy and decided to make themselves some fancy new duds out of the same stuff they’d been smoking.

We know that hashish, a concentrated pipe-smoked form of cannabis was popular in the Middle East and parts of Asia from around 800 CE onward. On an interesting etymological side note, the modern word for “assassin” is derived from “hashish.” You see, during the Crusades into the Holy Land, Crusaders came across a fanatical Ismaili Muslim sect in the mountains of Lebanon. These “hashishiyyin” (Arabic for “hashish-user”) were feared for their reputation of becoming intoxicated by eating hashish in preparation for covertly murdering the leaders of enemy sects: and thus the term assassin was born from hashish. But it would be myopic to think that all hashish users did so as part of ritual murder. The reason for hashish’s popularity may be due to the fact that the Quran prohibits alcohol and other intoxicants but makes no mention of cannabis, and the popularity and spread of hashish corresponds with the expansion of Muslim influence in the region.

And yet Muslims were far from the only cannabis users in the Mediterranean. Jewish peoples in Palestine during the 2nd century BCE are known to have cultivated cannabis from seeds, as is noted in the Mishna which is also known as the “Oral Torah.” Likewise, late Medieval European Christians such as the Prussians of the Holy Roman Empire and the Roman Catholic Italians used hemp in cooking. For example, hemp was used as a filler in pies and tortes or to make stock for soup when boiled. Hemp has immense potential for food production in both classical and modern times, but that’s a topic we’ll dip our toe into in next month’s post on modern hemp history.

Hemp has long been used for cordage as it is extremely rugged, water-resistant, mold-proof, and has a high tensile strength once braided into rope. Flax and other fibers used to produce sailcloth and canvas tore more frequently than hemp sails and began to rot and mold sometimes within months of production due to the humidity and caustic nature of the sea air. By the era of European colonialism and expansionism, the economic power of hemp was undeniable on the global stage, as no other textile could compete with hemp in terms of production cost, durability, and versatility. Jack Herer, noted cannabis advocate and historian, asserts that, “In addition to canvas sails, until this century virtually all of the rigging, anchor ropes, cargo nets, fishing nets, flags, shrouds, and oakum (the main protection for ships against salt water, used as a sealant between loose or green beams) were made from the stalk of the marijuana plant. [All throughout the 16th-19th century] an average…naval ship of the line…carried 50 to 100 tons of cannabis hemp rigging, not to mention the sails, nets, etc., and needed it all replaced every year or two, due to salt rot.” It cost more to outfit a ship with all this hemp than it would have cost to buy and build all the wooden parts of the ship itself, if that gives you an indication of the immense value placed upon hempen textiles at the time.

It was in this capacity that hemp first arrived in the New World in the form of Christopher Columbus’ rigging and sails when he sailed the ocean blue in 1492 to meet new and exciting cultures and commit genocide upon them. The Western Hemisphere became a new stronghold for hemp as King Philip of Spain decreed that hemp must be cultivated in the New World by 1545. And thus an old world sacramental herb made a new home in the West and took on new life beset on all sides by ideological obstacles, but that is where we will pick up next month in our forthcoming post on modern cannabis history!