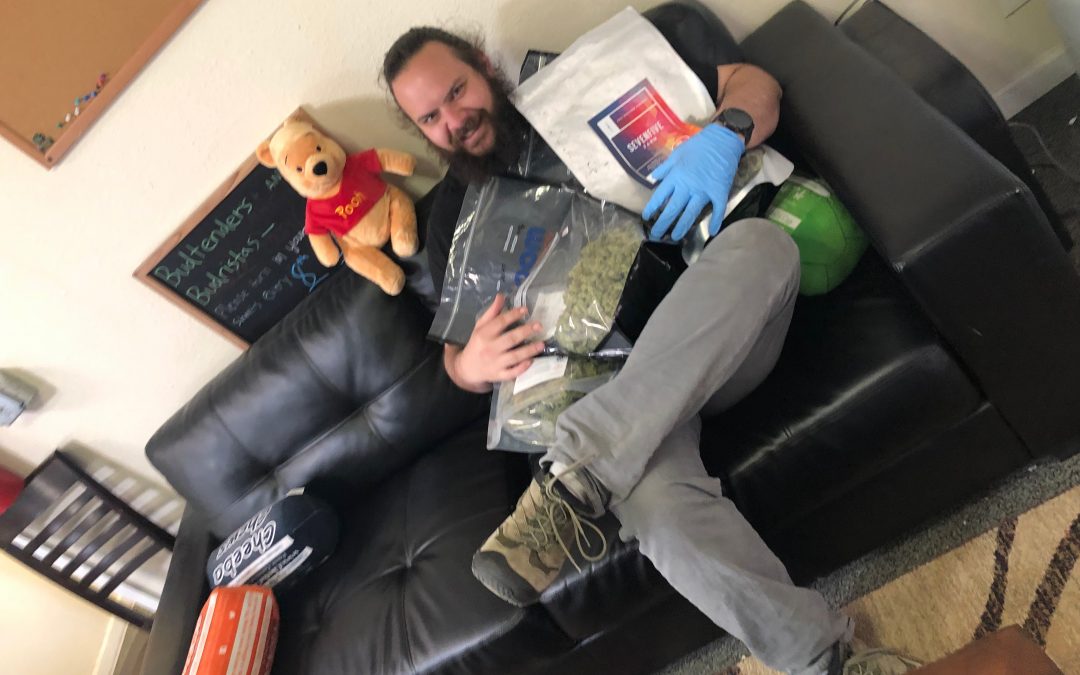 Well, Dear Reader, I think it’s about time I introduce myself. My name is Max Tegethoff, and I’m the assistant manager at Elements Boulder Dispensary. If you’ve shopped at Elements, in all likelihood you’ve run into me in person–there are only eight of us here and I’m the biggest and hairiest of the bunch. And if you’ve read this blog before, then you have read some of my work. I’ve been working in the cannabis industry for just over two years now, and the entirety of that time has been here at Elements. Since we’re a small Mom-and-Pop shop, everyone wears a bunch of hats but mainly I budtend, process deliveries and shipments, order glass and accessories, conduct some inventory, write the blog, and sample the goods.

I was born and raised in Tucson, AZ not long before the fall of the Berlin Wall. There are three of us kids in the family–two boys, one girl–and I’m the middle child. I grew up playing hockey in the middle of the desert. Ice rinks are one of the consistently chilly places in Tucson. Dad was the coach, and my brother and I played on the travel team, so we were constantly on the move. Off-season was for soccer, swim team, and baseball. Middle school and high school were standard teenage misery. I quit hockey and picked up Tang Soo Do, a Korean martial art.

For college I decided it was time to get the hell out of Dodge. I did undergrad at Knox College in Galesburg, IL with a major in creative writing and a history and classics minor. I write fiction, almost entirely sci-fi and fantasy. While at Knox I got into fencing and began competing. There is no better stress relief around finals time than cracking a saber over someone’s head. I took over as coach two years in and started training during the summers at a private academy. I graduated in 2010 with college honors and cum laude. For my honors project, I wrote three nearly 300 page drafts of a novel. I won a post-baccalaureate award, so I got to go back to Knox for a fifth year for free so long as I created a service project. This is when I first started teaching: I got teaching assistantships in creative writing, classics, and literature. Knox is a tiny liberal arts college, so I got to work very closely with some of my favorite professors and received my first taste of lesson planning, grading, and lecturing.

Once I left Knox, I moved up to Florence, MT, a little town south of Missoula in the Bitterroot River Valley. I spent a year and a half up there bouncing around a few jobs and applying to graduate school. I received my swiftwater rescue certification on the Blackfoot and Clark Fork rivers and ran as raft and riverboard guide in the Class 4 and 5 rapids in Alberton Gorge. Then I got into a graduate program in creative writing at Southern Illinois University Carbondale. I left after two of the three years in the program because none of the faculty were willing to work on my thesis committee if I continued to write fantasy and science fiction. Those are the only genres I was interested in and were the genres I got accepted into the program writing. So I told them they could sit and spin. I moved back home to Tucson, worked a miserable year as overnight security, and decided I had left Tucson initially for good reason. I moved to Tulsa, OK to teach English and live with some friends who were also working as educators. I spent two years in Oklahoma teaching and working at an airsoft field. I rescued a shelter dog, a big white and black spotted pitbull mix who is to this day my roommate, trusty travel companion, and best friend. Two years in Tulsa were too many. So on to the next adventure.

The dog and I moved out to Lafayette, CO in July of 2017 with the intention of working in the marijuana industry. I figured working in Colorado at this juncture was as close to cannabis college as you can get in the real world, and I knew there was money to be made in the field, even if I was relatively ignorant of everything else in the industry besides smoking the devil’s lettuce. As soon as I got my Colorado state drivers license, I applied for a support badge to work with cannabis and then started hustling for jobs. I lucked out and landed a job at Elements the day after I dropped a resume off, because a new hire didn’t show up the day prior and didn’t call in, so the position re-opened. I’ve been told I dropped my resume off only an hour after that person was supposed to start working. Needless to say, things have worked out well since then, and I haven’t looked back. I love the company I work for, the people I work with, and the loyal regulars who make Elements the shop it is. When I was promoted to manager a few months back, my boss asked me if I would like to work on our dispensary’s blog knowing about my background in writing. I jumped at the chance. I basically get paid to research and educate folks about various topics revolving around cannabis. It’s fantastic! I’m hoping to make a career in the burgeoning marijuana industry, especially as more states legalize recreational marijuana. Fingers crossed federal legalization isn’t too far behind.

Ultimately, I hope to end up back in Montana with a recreational dispensary of my own someday, but that’s a few years away at least. To be honest, I am much more interested in opening an infused coffee shop and patisserie, because I like baking edibles, but at the moment Montana is vertically integrated, so to do that I would need to have both a grow and a dispensary to do so. And that’s all she wrote. Feel free to come visit me at Elements Boulder or reach out to me at max@elementsboulder.com.